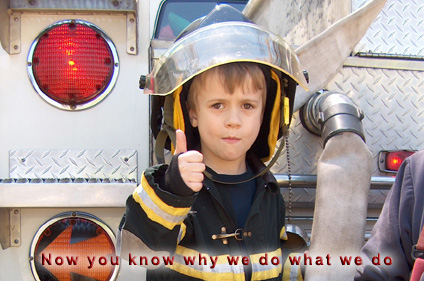 The Elmira Fire Department is committed to serving the citizens of Elmira in a professional manner. We accomplish this with a highly trained staff prepared for fire response, emergency medical assistance, fire prevention activities, code enforcement, and inspection services. We treat all members of our community with respect and dignity in all of our daily operations.

The emergency medical and rescue response we provide has become well known to the residents of Elmira. Each piece of fire apparatus is equipped with basic life support and early defibrillation equipment. Every member of this Fire Department is prepared to deliver highly skilled emergency medical and rescue services whenever they are needed. Our hazardous material emergency spill response unit is the only one of its kind in this section of New York State. We provide this service throughout Chemung County with the cooperation and the assistance of the other fire departments in the county.

When city residents are suddenly confronted with an unexpected emergency, the Fire Department usually represents their only resort in dealing with the situation. Elmira firefighters have made a commitment to education and training to the highest of standards. This helps us to respond and assist citizens facing a true emergency in the most effective manner.

As chief, I am very proud of the interest and dedication exhibited by the personnel of the Elmira Fire Department. I believe their continued enthusiasm has the potential to make this organization one of the finest, most productive and efficient municipal Fire Departments in New York State.

In August of 2022, Chief Andrew Mallow succeeded Joseph J. Martino as the 15th Fire Chief of the Elmira Fire Department. Chief Mallow attended Southside high school where he graduated from in 1994 and when on to Corning Community College to study CAD and Mechanical Tech. Mallow has been with the Elmira Fire Department since March of 1999. He was then promoted to Lieutenant in June of 2019, Fire Marshall June 2022, and now Fire Chief August 2022.

Before joining the Elmira Fire Department, he started a construction company in 1997, Mallow Construction, working on residential and commercial remodeling. He continued to run and work at his company even after joining the fire department in ’99.

In 2014, Mallow opened MCS woodworking, which was a cabinet and mill work shop. Again, he ran this business and worked at it while also working for the EFD. He just recently closed that businesses in 2021 due to the pandemic and picking up more responsibilities at the EFD.

On top of all of this, he obtained his code enforcement certification in 2000 and went on to be union president from 2005-2015.